I like Eclectic. I am a blogging mutt. Sometimes I will dress it up a bit with a poem or song.
9 Comments

Posted by gimpet on June 8, 2013 in Re-blogged
Re-posted from Infowars.  Original blogger: “westcoast”

Back in the early 1940s the US Government needed an area far removed from nearby civilization but close to a clean water supply, so they could produce plutonium and get in on the nuclear arms race.  They found that in a remote area in Washington State.  Even though there were two small towns and an Indian tribe living there….they simply took it:

In December 1942, Groves dispatched his assistant Colonel Franklin T. Matthias and DuPont engineers to scout potential sites. Matthias reported that Hanford was “ideal in virtually all respects,” except for the farming towns of White Bluffs and Hanford.[21] General Groves visited the site in January and established the Hanford Engineer Works, codenamed “Site W”.  The federal government quickly acquired the land under its eminent domain authority and relocated some 1,500 residents of Hanford, White Bluffs, and nearby settlements, as well as the Wanapum and other tribes using the area.[22] DuPont advertised for workers in newspapers for an unspecified “war construction project” in southeastern Washington, offering “attractive scale of wages” and living facilities.

Note: There is a whole bunch of interesting info on the following linked WIKI site, and I suggest you at least browse through it so that you understand the massive project that this was.  The B reactor was the largest in the world.  It is now the MOST CONTAMINATED SITE IN THE WORLD.
Source

So….what is the Green Run?  Hanford was the largest plutonium producer in the world.  Over half of the plutonium used in the USA’s arsenal was made there.  In the beginning of this mad rush, they weren’t too concerned about safety issues and large amounts of radioactive isotopes were released.  Even so, the single largest release in a day was intentionally done.  It was a test.  By our own Government.  The public (although rumored) didn’t officially know about it until forty years later when the documents were declassified by the DOE. 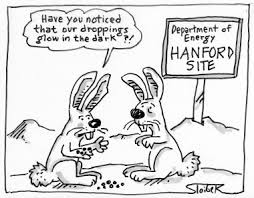 In 1949 the Russians were ramping up their own nuclear arsenal and began testing nukes.  Our government was scared and wanted a way to measure for these tests.  We had no basis to go off of, so they decided to use the Hanford site as a test facility by intentionally releasing radioactive material into the air and then testing the levels.

Activities at Hanford resulted in the release of large amounts of radiation into the air, water and soil of the Northwest over several decades. Many of the radiation releases have exceeded permissible limits.  Some of the radiation releases have admittedly been intentional, a way of conducting Cold War nuclear experiments on a unknowing and captive population (opinion). All of it was done in the name of the national security and the rush to produce more and more plutonium.

The largest intentional release of radiation at Hanford occurred in 1949, and is known as the “Green Run.” The public were unaware of this event until some 40 years later, in the late 1980’s, when the DOE first declassified release reports acknowledging that the Green Run had occurred and then only after a newspaper reporter sued the agency.

Documents showed that Hanford intentionally and secretly released about 8,000 curies of radioactive iodine on Dec. 2, 1949. Allegedly the radiation was released to monitor the radioactive plume stretching across Oregon and Washington in hopes of evaluating equipment used in determining the location of similar Soviet plutonium production plants.

The Green Run was a huge release by any standard. The 1979 Three Mile Island accident released between 15 and 24 curies of radioactive iodine, several hundred times less than the Green Run, and nearby residents were evacuated from the area. 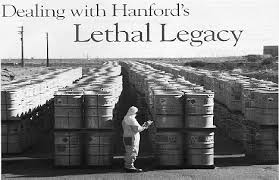 No one living downwind from Hanford was ever evacuated or warned of the Green Run or any of the other radioactive release from Hanford.  Spanning more than 40 years, a set of 400 environmental documents were made public in 1986. These documents revealed that Hanford regularly emitted radiation into the environment. Between 1944 and 1947 the total estimated radioactive iodine released from Hanford was at least 685,000 curies; a truly staggering amount.

When local residents, concerned over the rumors of this and other releases, asked about it the government told them that it was “as safe as mothers milk”.

Today, citizens of Washington, Oregon and Idaho are outraged that the federal government secretly irradiated them and lied about it.  Many are worried about their health, and for good reason.  By 1940 standards (much more lax than those of today), the Green Run alone exposed those living near Hanford to amounts of radiation 20 times above tolerance thresholds.  Those who lived downwind of Hanford in the years of the releases have subsequently reported widespread incidents of serious diseases often associated with radiation exposure, including cancer and thyroid disease.

source for above two quotes

In 1946 General Electric took over operations and quickly began building more reactors.  By 1963 there were NINE nuclear reactors at the site.  All but one of those reactors were shut down by 1971 (my birth year) and the last one finally in 1987.  It now houses a host of nasty nuclear waste, including the most dangerous in the world. 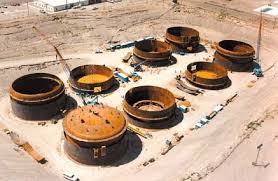 hanfordchallenge.org
Problem is, those underground containers are leaking.  Turns out they have been leaking for decades and even though they knew about it, nothing has been done.  These containers sit next to the Columbia river:
The Columbia River is the largest river in the Pacific Northwest region of North America.[9] The river rises in the Rocky Mountains of British Columbia, Canada.  It flows northwest and then south into the US state of Washington, then turns west to form most of the border between Washington and the state of Oregon before emptying into the Pacific Ocean.  The river is 1,243 miles (2,000 km) long, and its largest tributary is the Snake River.  Its drainage basin is roughly the size of France and extends into seven U.S. states and a Canadian province.
Source
Obviously, if this river were to become polluted with nuclear waste, the outcome would be devastating for the whole PNW…and potentially the world.
What is being done about this blatant attack on America’s people, our land and lives?  Well….absolutely NOTHING.  That’s right.  Nothing.  In fact, the ‘downwinders’ that have suffered numerous sorts of cancers and illnesses have been in litigation for years and NOTHING has been done.  Even though our own government acknowledged that this release happened in the 1940s and the effects of these massive doses is well documented.

From Carol Forsloff – Lori McMillan is one of a number of people who claim to have serious health problems related to radiation exposure from living near the Hanford Nuclear Plant. Like others who are referred to as “downwinders,” her claims are contested by science and the law, even as anecdotal evidence mounts against Hanford, an area in Eastern Washington said to be more contaminated and dangerous than any area in the world. Her story is like many other people, including this journalist, who was married to nuclear physicist, Francis Czerniejewski, and who lived in the region just a few miles from Hanford for five years during the 1960′s. source

Here is a site that describes the multiple lawsuits and their outcomes.  As of 2012, only a few people have managed to settle out of court.  This is out of THOUSANDS and the cost of years of litigation that most people can not afford.  Take some time to read and research what these people have gone through.  Totally unbelievable.

Now this brings us to today.  Almost 35 years later, and we are now just seeing something in the MSM about the poison leaching into the ground at this site.  A local Seattle news station (King 5) has a series of investigative news reports into this.  Here is a link to all of them: Hanford’s Dirty Secrets   Haven’t heard about it?  Not surprising.  I am amazed they were allowed to broadcast this and applaud them for it.  Some excerpts:

The private company that manages the radioactive waste tank farms at the Hanford Site ignored or missed numerous red flags over a 10-month period that showed a double-shell tank holding some of the worst waste was leaking.
Over much of that time, one Washington River Protection Solutions (WRPS) employee — Mike Geffre — continued to urge his superiors to take some sort of action.
But from Oct. 9, 2011 — the day a leak detector alarm went off  — until the first week of August 2012 — when a scheduled video inspection documented the leak — WRPS let evidence of the problem pile up without taking action to confirm what the tank monitoring instruments were showing and what advice experienced employees like Geffre were offering. The leak was not officially confirmed and revealed to the public until Oct. 22, 2012.

In one of the other linked stories above, they report how the DOE (department of energy) contributed over a million dollars to the lawsuit to help defend against a whistleblower.  It appears that our own government is helping to pay to keep people quiet, and punish those who aren’t.
It is a fact that our own government intentionally poisoned us.  I don’t know what is worse; that they did it or are now unwilling to acknowledge the consequences of their actions.
We now know (thanks to reports like King 5 and the people brave enough to stand up and talk), that there is hazardous waste leaking at the site RIGHT NOW.  Not just a little….150 to 300 gallons a year, possibly since 1979.  This is the worst stuff on the planet, right next to a major tributary in the United States.  It is happening NOW, right HERE.  Just because it isn’t something that you can see, doesn’t mean you shouldn’t be afraid or involved.

I'm interested in your thoughts and ideas! Cancel reply

Older But Not Forgotten

Walking in the Air

The Bus the Flew Over A Ravine

Close Encounters of the Vac-Alien Kind

To Dr Seuss With Love

The Ray That Strayed

© Lorene Pinkley and RepressedExpressions, 2014. I am happy and honored for you to re-post any of the material presented in this blog that you feel is of interest to others, but please reference my full name and blogsite with any re-posting. As to any other uses, please email me and explain how you wish to use it. I will email you back, promise, unless I am in a coma!